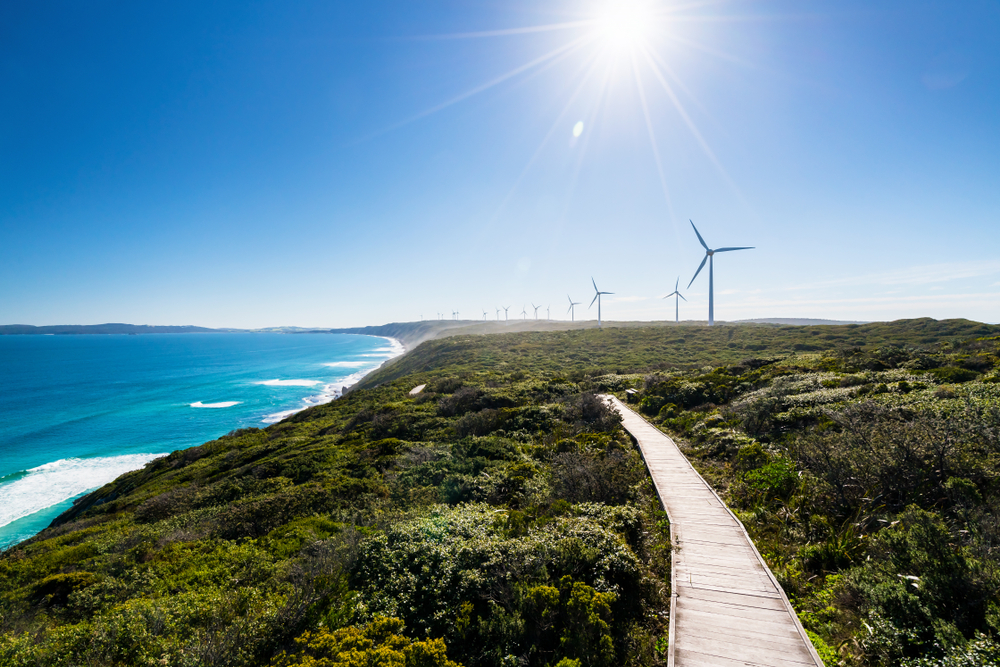 Wind farms are one of the renewable energy sources produced in land-rich Australia. Pictured is the famous Albany Wind Farm in Albany, Western Australia. (IMG/Shutterstock)

Australia is one of the biggest carbon emitters in the world — on a per capita basis. The country produces about 17 tons of carbon dioxide emissions per year. To put those numbers into perspective, that’s more than three times the global average of 4.8 tonnes (in 2017).

In July this year, new rules were drawn up to support the next generation of low-emission energy (LET) technologies.

Despite the lack of a formal net zero target, Australia is seeing an increase in investment in the clean energy sector. For every dollar invested in renewable energy sources, 90 cents went to wind and solar power, according to the Australian Energy Market Operator (AEMO). The AEMO manages Australia’s electricity and gas markets.

Last month, ACE Power came into the picture, aiming to pump in around A$2.5 billion in spending by 2024/25 to build wind, solar, battery and storage projects – 10, to be exact.

According to Koovashni Reddy, director of development at ACE, the first four projects should be financially complete by the second half of next year. Recently, their efforts have already succeeded in acquiring 1.3 gigawatts of proposed renewable generation capacity.

Of the four projects, two solar farms in Victoria and two others in Queensland have already received development approval, while earlier-stage projects are still awaiting approval. According to Reddy, all projects are in the process of securing network connections.

Supported by The green future of Pelion in Germany as majority investor, ACE Power is the German company’s first Australian investment. Under equity agreements, Pelion would provide crucial development funding for these projects.

They would then translate into listed Pelion entities, according to Reddy. Pelion has a solid track record in the development of green energy in Europe. Unlike Pelion, however, ACE Power appears to be a rather unknown entity, having been formed in April 2021. Check their website by Asia technical thread resulted in a static homepage with nothing else.

All 10 planned ACE Power projects were reportedly acquired from a company called CleanGen Projects. Of these 10 projects, nine are solar parks, the last being a wind farm. They are to be spread across all major national electricity market states, including Queensland, New South Wales, Victoria and South Australia.

These moves to procure and produce more renewable energy sources seem to bode well for the country. Efforts by government, as well as private sector actors, are essential to reduce or eliminate dependence on coal for the country’s energy needs.

The lucrative opportunity for private players in the Australian and regional renewable energy market is also very attractive, making it easier for all electricity users, including households, but more importantly industries and sectors. commercial units that consume approximately 79% of the country’s electricity. , to switch to safer and cleaner energy.

Late last month, Sun Cable’s Australia-Asia PowerLink (AAPowerLink) got the go-ahead from Indonesia to route its network across Indonesia to connect your solar farm in Darwin, Australia, Singapore.

Jam (she/they) is the editor of Tech Wire Asia. They are humanists and feminists with a love for science and technology. They are also aware of the intersectionality of the above with ethics, morality and its economic/social impact on people, especially marginalized/underdeveloped communities.