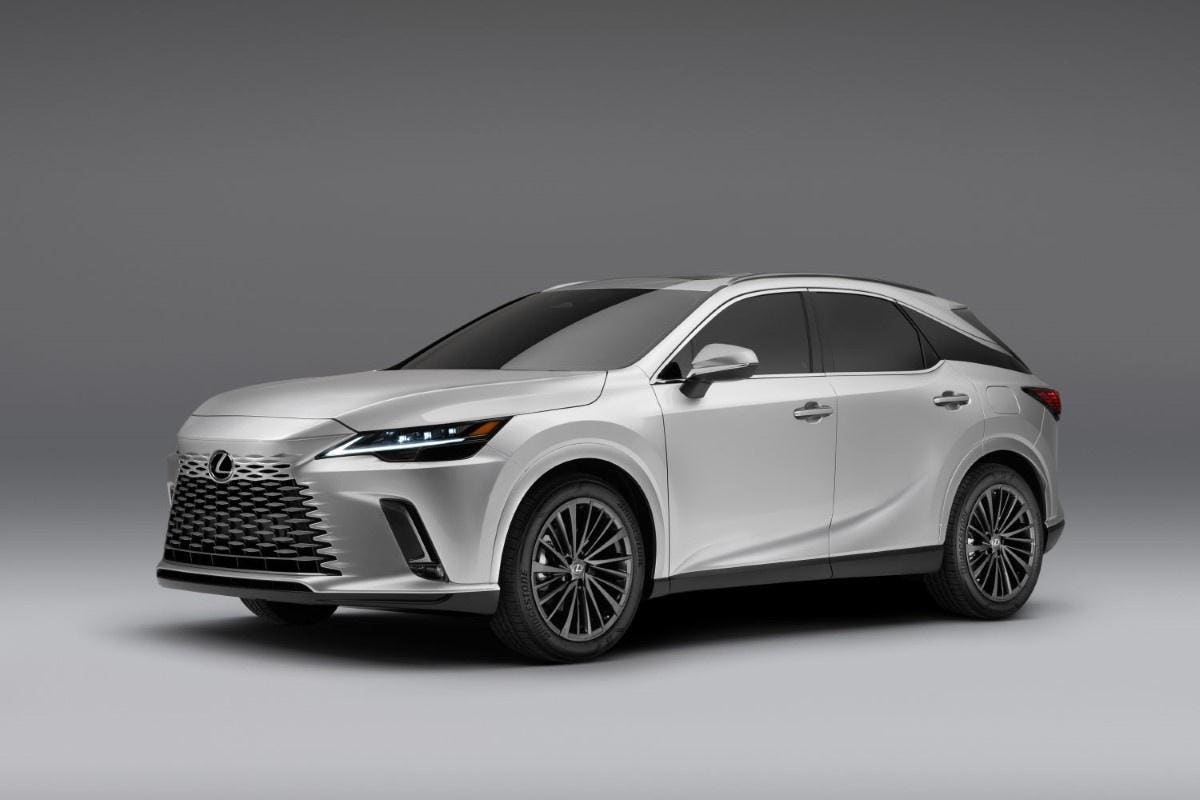 As the Lexus RX nears its 25th anniversary, Toyota’s premium brand is giving the original luxury crossover a complete makeover with a full new set of powertrain options. For the first time since its launch in 1998, the new RX won’t have a six-cylinder engine lineup, but it will get a hold in two variants.

The 2023 RX may be brand new, but it should be immediately familiar to anyone who’s seen the fourth-generation model. The greenhouse in particular looks almost identical to the model it replaces while the lower sheet metal sees a more visible remodel. The upward sweep of the underbody remains, but the wheel arches have become more rounded than before.

The most significant difference is at the front, where the signature Lexus tapered grille has been reworked. Instead of the grille continuing along the front edge to the line of the hood, it now has a fade effect as it approaches the crease between the headlights, with the upper portion now solid. The LED headlights retain the stylish L signature lighting that is also found in the taillights. However, the back now features a full-width light bar that emphasizes the RX’s new stance.

The RX sits on a new platform dubbed GA-K that uses more optimized structures and materials to achieve weight reductions of up to 198 pounds. Overall length of 192.5 inches remains unchanged, but the wheelbase has been extended by 2.4 inches, with the rear axle moving farther back and providing more rear legroom. The rear wheels are now supported by a new multi-link suspension arrangement in place of the old double-wishbone setup. Height has been reduced by 0.4 inches while the RX is now 1 inch wider.

While the RX previously offered four-cylinder engines in markets outside of North America, we only had V6 units that were standalone or with a hybrid system. This time the lineup starts with the base RX350 now powered by a 275 horsepower 2.4-liter turbocharged four-cylinder that also delivers 317 lb-ft of torque, a substantial increase from the 267 lb-ft of the old 3.5 liter V6. The combination of reduced weight and increased torque should make the new RX noticeably more responsive.

The RX Hybrid has long been the best-selling electrified model in the Lexus lineup and this year it’s getting the same treatment as last year’s Toyota Highlander. Instead of the previously offered V6 hybrid setup, the RX350h features Toyota’s 2.5-liter four-cylinder with a hybrid drivetrain driving the front wheels and a second motor on the rear axle. This should increase EPA combined fuel economy by 10 percent to 33 mpg over the old RX450h.

Next comes the first RX plug-in hybrid, the RX 450h+. No details are given on this variant yet, but it will likely use a similar setup to the Rav4 Prime and Lexus NX450h+ with an 18.1kWh lithium-ion battery, the 2.5-litre four-cylinder and power increased electric front and rear for about 302 hp. . Details on this model will come later.

Finally, there’s the RX500h F Sport Performance. In the past, the F Sport was little more than a sporty-looking package without noticeable mechanical upgrades. This time it will be the top-spec variant of the RX, using the 2.4-liter turbocharged engine with hybrid drive for a combined output of 367 horsepower and 406 lb-ft of torque. For the first time, the RX 500h also uses a conventional 6-speed automatic transmission instead of a CVT for a better performance feel. The RX500h also gets upgraded six-piston front brake calipers and 21-inch wheels along with a mesh grille to let everyone know you got something different.

The comprehensive driver assistance suite that bears the hallmark of Lexus Safety System+ 3.0 is standard with features such as radar adaptive cruise control, lane centering and blind spot monitoring. Pre-Collision now includes both pedestrian and motorcycle detection in addition to support for intersections. The new RX finally ditches Lexus’ terrible trackpad interface in favor of the latest-generation infotainment system that debuted on the new NX. That means a central 14-inch touchscreen and a much cleaner, more responsive user interface.

The new RXs are targeting an on-sale date by the end of 2022, but no pricing information is yet available.