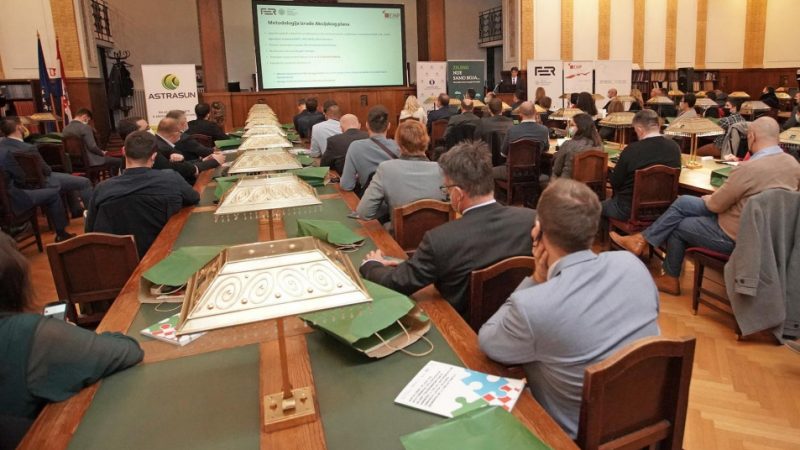 The government has improved legislation that facilitates the process, including the recently passed new electricity market law.

Read this article in Croatian.

The Croatian State Archives hosted the promotion of two expert studies on renewable energy sources in Croatia, initiated by the Croatian Association of Renewable Energy Sources and financed by the European Bank for Reconstruction and development for an amount of 1.1 million kuna (€146,000).

Action plan for the necessary reinforcement of the electricity network for the integration of renewable energy sources in Croatia, prepared by experts from the Faculty of Electrical Engineering and Computer Science of the University of Zagreb and the Institute of Energy Hrvoje Požar, and Guide for the development and implementation of renewable energy projects in Croatia prepared by a group of experts led by the consulting company EnergoVizija, has become the basis for investments in renewable energy projects and their integration into the electricity system of the Republic of Croatia and an important support for achieving the objectives set by the 2030 energy development strategy with a view to 2050.

All over the world, and in Croatia as well, we are witnessing a transition in the energy sector towards cleaner, so-called green technologies. This is particularly evident in the electricity sector, where most investments in recent years have been linked to the construction of renewable energy sources.

The director of the European Bank for Reconstruction and Development, Victoria Zinchuk, expressed satisfaction with the preparation of these two studies: “For the EBRD, investing in renewable energy sources is crucial, so we are happy to to have the opportunity to work with the Renewable Energy Association of Energy Sources of Croatia and other stakeholders in the implementation of these two important projects that will help put Croatia on the investment map for all investors international and national organizations and to support the green transition in Croatia.

The Republic of Croatia has set ambitious goals for a greater share of renewable energy sources and has stimulated great interest in the development and investment in wind and photovoltaic power plants, and to achieve this it is important to invest in electricity and regulatory and operational changes . “The Government of the Republic of Croatia has improved legislation that facilitates the processes, including the recently adopted new law on the electricity market and the law on renewable energy sources,” said Ivo Milatić, Secretary of State at the Ministry of Economy and Sustainable Development. .

Emphasizing that a lot has already been done, but also that the Government is on the verge of adopting decrees and implementing acts, while investors and all other stakeholders have a lot of work to do to apply for energy approvals for new capacities in order to reach the target of 3,000 MW. renewable energy sources by 2030.

“There is probably no area of ​​economic activity in Croatia in which there is greater investor interest than renewable energy sources. More than 200 projects are currently under development, for a total capacity of more than 13,000 MW, representing a total potential investment of probably more than 10 billion euros. Although it is clear that many projects will not be realized in the end, this is still an extremely large and important investment cycle,” said Dr. sc. Goran Majstrović from the Hrvoje Požar Energy Institute. “Despite the great energy potential and the interest of investors, the realization of projects of this type is relatively low – in the last 15 years, around 1,000 MW have been built. There are several reasons for this, and the connection to the grid is one of the three main obstacles to the development of these projects, along with environmental protection and spatial planning,” Majstrović added.

Teacher. Dr sc. Igor Kuzle from the Faculty of Electrical Engineering and Computer Science at the University of Zagreb, explained: “The entire public energy sector, as well as utility companies, were mostly unprepared to changes in green technologies, which resulted in far fewer projects than expected. connection of new generation plants in the Croatian electricity system whose peak (maximum) load is slightly more than 3,000 MW”.

In addition to legislative and regulatory changes, the study contains an action plan for technical, technological and operational measures, where it proposes, among other things, how HOPS, independent transmission system operator in the Republic of Croatia, and HEP ODS, distribution system manager accelerate network reinforcement, network investments required for transmission and distribution network technical requirements for connection and operation of variable renewable energy source and finally resource reinforcement measures human and capacity.

“These are the first studies of this kind in Croatia and they are proof of excellence, and this synergy between the economy and the academic community, which is a rarity, has proven to be of exceptional quality”, said declared mr. sc. Maja Pokrovac, Director of the OIEH (Economic and Interest Association Renewable Energy Sources of Croatia), expressing her satisfaction and gratitude to all the collaborators of the project, in particular the EBRD, which recognized the importance and the need for these studies in Croatia, but also recognized the OIEH as a driver of change in the sector. “I am happy to announce that we at OIEH have launched two new studies on floating power plants and agro-solar, and their development will again be funded by the EBRD,” Pokrovac added.