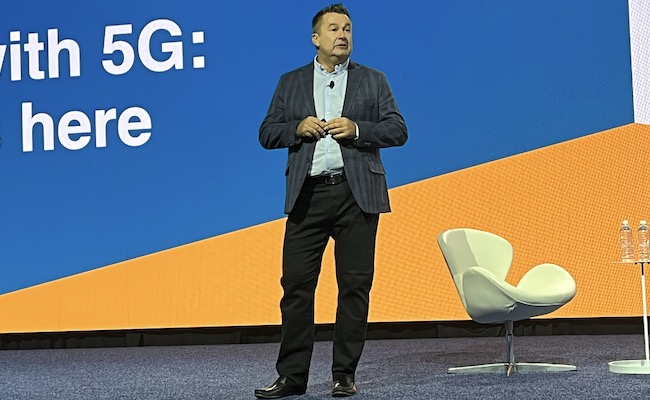 LIVE FROM MWC LAS VEGAS 2022: While the mobile industry has been driving sustainability efforts for years, it’s even more important today amid soaring energy costs, which is why the recent Amazon Web Services trial (AWS), NEC and NTT Docomo to reduce power consumption on 5G standalone core looks promising.

The trio announced at MWC 2022 in Barcelona that they would jointly work on a proof-of-concept trial to test the power efficiency of AWS Graviton2 processors on NTT Docomo’s 5G core network elements.

Hiroyuki Oto, SVP and GM of Core Network Development for NTT Docomo, said in a video during a keynote that he was surprised to see an average reduction of 70% in power consumption during the trial.

Adolfo Hernandez, vice president of global telecommunications industry for AWS (illustrated), went a bit father describing the results as “breathtaking” during his keynote.

“I think it’s just a good time for us as an industry,” he noted. “Sustainability is super important. “We need to seriously think about it and we need to discuss it as an industry.”

After the first phase of the trial is complete, the companies plan to conduct a second phase to test the 5G core network function on AWS outposts equipped with Graviton2 processors at Docomo premises.

Hernandez noted that running workloads in the cloud was at least 3.6 times more efficient than running them in a data center.

He said AWS currently powers 85% of its operations with renewable energy with the goal of reaching 100% by 2025.

Additional trends
In addition to sustainability, Hernandez identified three other trends that are driving innovation in the telecommunications industry.

The first is that telecom operators must become “techies” to provide new use cases for enterprises.

“Being a tech enables telecommunications [companies]to partner with new players like AWS and our partners, and on our partner channel in our marketplace, to bring this innovation to businesses and drive growth for the telecom industry,” he said.

To underscore the opportunity, he cited data from Gartner that indicated there was a $5.6 trillion ICT opportunity over the next two years for operators.

“The B2B market hasn’t generated the growth this industry needed, but the opportunities are definitely there,” he said.

The second trend is that as 5G becomes more widespread, it is possible to combine it with the digital transformation of enterprises.

The third trend is the rise of private networks, which Hernandez says is a topic that comes up continually in his meetings with clients.

While businesses have traditionally relied on Wi-Fi, it is expensive to provide coverage over large areas such as manufacturing facilities.

He noted that private networks provide greater coverage and security than Wi-Fi when paired with the cloud.

“The private network is going to be a big market,” he said. “There’s a lot of money for a lot of people to work together and drive innovation.”