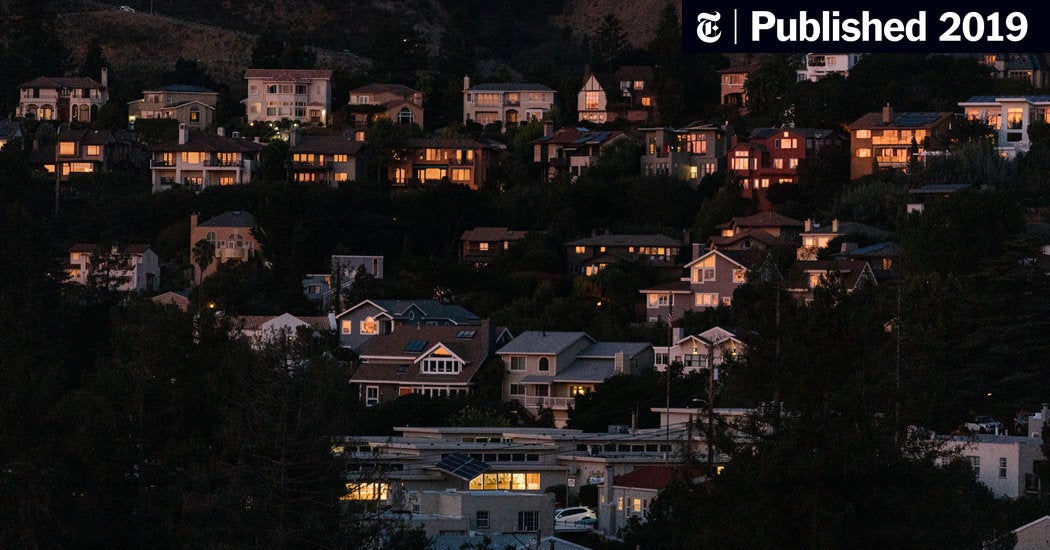 PARADISE, Calif. — The intentional blackout at California’s largest utility this week put Forest Jones out of work and his son in school. On Friday morning, Mr Jones, a handyman and single father, sat in his flat above a tattoo parlor waiting for the power to return and school to reopen.

“I’m probably going to lose $400 or $500 because of this,” said Mr Jones, who lives in the town of Paradise, which was flattened by fire last year and is slowly rebuilding. “Things have been really difficult here.”

Millions of people were affected by the blackout, which stretched from the outskirts of Silicon Valley to the forests of Humboldt County near the Oregon border. But the outage, which the power company said was necessary to prevent wildfires, also drew a line between those who were simply inconvenienced and those who faced major financial difficulties.

Having the lights on, the television on, and the kitchen appliances humming is often taken for granted in America. During the California blackout, it became an economic privilege.

The economic impacts of the shutdown have been particularly acute in rural northern towns like Paradise, where incomes are only a fraction of those in the San Francisco Bay Area.

Both wealthy and poorer areas were affected by the blackout, but interviews across the state suggested being forced off the grid disproportionately hurt those less well-off. A Humboldt County family said they spent $150 on batteries and water alone during the shutdown.

“Being prepared costs money,” Sue Warhaftig, a massage therapist who lives in Mill Valley, an affluent suburb across the Golden Gate Bridge from San Francisco. Ms Warhaftig went around two days without power but said she was spared significant sacrifice during the blackout.

She invested in a generator to run the fridge and provide some light. She cooked in the family’s Volkswagen motorhome in her driveway. At night, she watched Netflix on her phone, which she was able to recharge with the generator. Her husband, a businessman, is in London on a business trip. His two sons, both adults, live in Southern California and Seattle.

“We were inconvenienced but life was not interrupted,” Ms Warhaftig said. “But so many people’s lives were.”

On Friday, Pacific Gas & Electric restored power to large parts of northern California, including Paradise, where power was restored in the afternoon. But hundreds of thousands of people in other regions remained in the dark. The carcasses of burnt-out cars still litter the landscape around Paradise, where 86 people died in the campfire last year, some of them as they tried to escape.

Power company officials said by Saturday they hoped to have restored power to 98% of affected customers.

The same dangerous winds that caused the shutdown in Northern California put firefighters to work in the South. Los Angeles County authorities ordered the evacuation of nearly 100,000 people on Friday as the Saddleridge Fire scorched nearly 5,000 acres and destroyed 25 structures. The sandalwood fire, which ignited Thursday in Riverside County, had spread to more than 800 acres and destroyed 74 structures by Friday afternoon.

While this week’s outage was the first time many customers in Northern California suffered a deliberate power outage, residents of Paradise and the surrounding area have seen their power cut four times in the past few months, residents say. .

Many use a generator, but running one has become increasingly expensive with gasoline at over $4 a gallon in California.

On Friday, Dennis and Viola Timmer drove up the hill to their home in Magalia, a town adjacent to Paradise, laden with $102 worth of gasoline for their generators. It was their second fuel since the power outage Tuesday night.

The couple, retired and on fixed incomes after Mr Timmer’s stint in the navy and in construction, said the power outage had severely limited their ability to do essential tasks like cooking or leave the house.

“You know what that does? You are in jail,” said Ms Timmer, 72. “You can’t go anywhere with the generators running.

Since the generators aren’t powerful enough to run the heating or air conditioning, the couple slept in their den with an electric heater.

“It’s really difficult because you don’t have a normal life,” Ms Timmer said. “You are trying to survive.”

Certainly, the shutdown has affected many people, regardless of their economic status. Areas without power were as diverse as the affluent suburbs of Silicon Valley, the former gold rush towns of the Sierra Nevada, the East Bay of San Francisco and the seaside town of Arcata.

In Santa Rosa, an hour’s drive north of San Francisco, Margery Cahn, who turns 100 in December, has a full-time assistant. Regardless, she was “pretty uncomfortable,” she said.

Ms Cahn’s mobile phone lost power during the blackout and even when she managed to charge it in her car, cell service was spotty, as was the case in many affected areas by the power outage.

Accustomed to staying warm at night with an electric blanket, Ms Cahn slept under a pile of four blankets.

Further south, in Marin City, Chanay Jackson stood surrounded by fumes from the generators still powering parts of the city.

She said food stamps were issued on the first of the month and many residents who had to throw away food were out of luck.

“They’re not going to issue more food stamps just because there was a power outage,” Ms Jackson said. “So they’re just screwed until next month.”

Pacific Gas & Electric, the utility that carried out the power outages, said the decision on where to shut off the power was strictly based on the weather. But some areas that weren’t considered vulnerable were isolated due to the structure of the network.

Strong winds have on several occasions in the past caused power lines to come into contact with vegetation, starting fires which are then propelled by the gusts. This was the case with the campfire.

Since higher elevations had more extreme winds, many of the neighborhoods where power went out this week were in hills and canyons, including in the Sierra Nevada.

The closure, which by one estimate affected a total of 2.5 million people, has come under heavy criticism from residents and politicians. The company’s website crashed just as customers were looking for information about the outage. Governor Gavin Newsom called it unacceptable. But his comments were nuanced, criticizing the way the shutdown was handled, not its rationale. Mr Newsom and others said the devastation of the campfire required preventative action to prevent it from happening again.

Still, the math of trying to avoid deadly fires by shutting off the power will continue to be debated as California enters its peak wildfire season.

In the town of Grass Valley, Matthew Gottschalk said he and his wife realized a generator was essential when they calculated they had about $500 worth of food in their fridge.

“I don’t know what we would have done,” said Mr Gottschalk, whose power went out on Tuesday evening.

His neighbors fill coolers with ice. Everyone hopes the power will return soon.