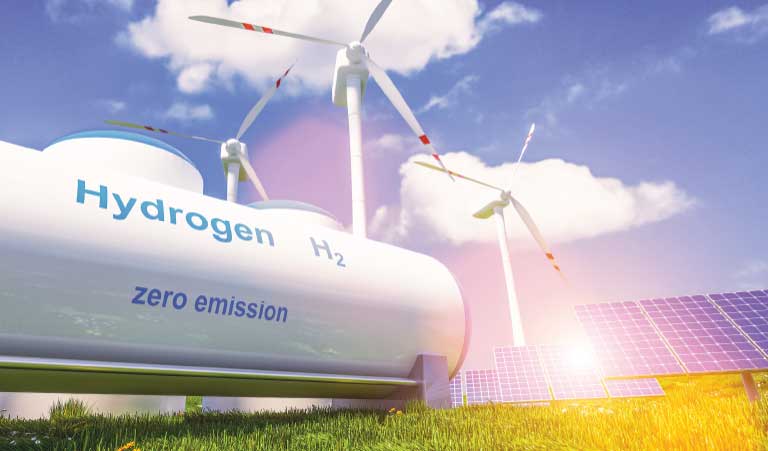 Everyone has known about solar for years. And, if you’re unfamiliar with offshore wind, you haven’t been paying attention to what’s going on in the state. But are you familiar with renewable natural gas and green hydrogen, both of which are already in use?

As New Jersey utilities transition to a clean energy future – striving to meet Governor Phil Murphy’s lofty goals of a 100% clean energy economy with an 80% reduction in greenhouse gases generated by the state by 2050 – they know there are many ways to get there.

They work on all of them.

This was one of the biggest takeaways from the recent ROI-NJ webinar: “Energy Sustainability and Infrastructure.”

Let’s start with renewable natural gas. In the simplest of definitions, it is the process of turning organic waste into a clean, reliable source of energy.

And, while the process produces clean energy… it’s a little dirty. The process begins by capturing the methane produced from existing waste streams, including animal waste (exactly what you think), food waste and landfills.

A new-day take on trash to cherish, you might say.

Christie McMullen, President of Elizabethtown Gasa subsidiary of South Jersey Industriescalls it a major initiative for the company.

“The energy industry already recognizes renewable natural gas as a viable emissions reduction strategy,” she said. “At South Jersey Industries, it’s a big part of our strategy. And we are investing heavily in renewable energy.

And not just in New Jersey.

“We have a development partner, REV LNG,” McMullen said. “We inaugurated eight renewable natural gas installations on dairy farms. We have four in Michigan, three in upstate New York, and one in Connecticut, on one of the largest dairy farms in the state.

SJI also has six major facilities slated for construction later this year in Minnesota and South Dakota, she said.

“Because of SJI’s ongoing partnership with REV LNG, we are well positioned to become a national leader in waste energy projects by 2025,” she said.

New Jersey Resources is banking on green hydrogen, something he says has huge potential — and it’s an energy source that fits the company’s profile well in the state.

Green hydrogen is defined as hydrogen produced by splitting water into hydrogen and oxygen, using renewable electricity. It is a flexible fuel that can circulate in underground infrastructures.

Especially infrastructure that has already been built.

Amy Cradic, chief operating officer of non-utility, strategy and external affairs at New Jersey Resources, said the company turned to green hydrogen because it works well with the 2, $3 billion in gas pipeline upgrades the company has done mostly on its coastline. territories (all made of modern plastic and steel, not cast iron, so environmentally friendly).

“We said, ‘How can we use this to reduce emissions in the state? “, She said.

“We were looking at what was happening in Europe at the time, four and a half years ago – green hydrogen was already in place there,” she said. “We thought, ‘Let’s help lead the policy. We have the infrastructure, do a proof of concept demo project.

The company uses an electrolyser, which helps create a flexible fuel that it can integrate into our existing infrastructure.

“It’s not a new technology, but we’re just starting to talk about it for home heating,” she said. “And the reason it’s such a powerful tool for this decarbonization narrative is because you’re using something that we already have, it’s already built.”

Which makes it even more profitable, Cradic said.

It also adds another tool to the clean energy toolkit – something more than electricity.

“We want multiple energy sources to create that reliability,” she said.

New Jersey Resources is already showing that it works.

“We’re the first utility on the East Coast to mix it up – it’s going to our customers’ homes today. We’re really excited about it.

New is cool. It is therefore old and reliable.

Susanna Chiu, Senior Manager, Operations Services, at Electricity & Gas Public Servicespoke about the company’s huge efforts around solar power and offshore wind, in partnership with Ørsted on a project.

But, she also reminded the public that in the excitement over offshore wind, they shouldn’t forget about nuclear power either.

“There is still a lot of work to do (on wind energy) and a lot of complexity,” she said. “It is important for us to preserve our existing nuclear fleet as our first source of carbon-free electricity production.

“So as the country ramps up its renewables, technology advances and more infrastructure is built, maintaining that nuclear fleet is essential for this zero-carbon source of energy.”

It’s critical to keep up with these technologies as they develop, suggested Rebecca Moll Freed, partner at Genoa is burning.

She said solar power, once the darling of clean energy fans, is starting to get pushed back because the rules and regulations around it aren’t being updated fast enough to make it a sensible option.

Moll Freed said she helps clients navigate the solar space, whether it’s the land use process, community buy-in, or the front end interface. utility board.

The problem, she said, is that some of the rules and regulations date from 2012.

“Sometimes the law can be a hindrance, because it goes beyond a certain snapshot in time,” she said. “(We have to) take stock of where we are now and say, ‘OK, that’s what we’ve been doing for the past 10 years, but, looking ahead, here are some of the changes that we need to really move to the next level.”

“We’ve seen a fair number of developers who are concerned about putting their capital at risk when the rules are somewhat rigid – and sometimes seem to be based on an understanding of what the world was like two or three years ago,” he said. -he declares.

The cost is also important.

Sheehan told the audience that ensuring the affordability of some of these clean energy projects is critical.

“Some of the assumptions about the cost of solar power have not come true over the past couple of years,” he said. “And, I think we’re going to see a push over the next six months to 12 months on the developer side to have those kinds of conversations with the board to understand that, if the governor’s goals are to be met, the The process must remain in place — and it must remain a competitive incentive to ensure New Jersey continues to be at the forefront of solar power development.

Business may be taking a cautious approach, but public services are not. SJI, New Jersey Resources and PSE&G are exploring all of these possibilities.

“We are the largest solar operator in the state,” she said. “We have invested approximately $1 billion and plan to invest another billion dollars.”

McMullen explained how SJI has a green hydrogen pilot program — and is actively looking to invest there and in other areas.

“At SJI, we commit at least 25% of our annual capital expenditures to sustainable investments,” she said. “We have a hydrogen demonstration project happening in our South Jersey Gas territory.

“And we work, not only within our companies, but with others. We have a Linden renewable energy project where they bring in waste and create (renewable natural gas). So it’s not just about what we do, but how we partner with companies to work together to deliver renewable energy.

“They’re saying, ‘We want to scale green hydrogen over the next decade – and we’re going to help you get there to bring that cost down, so you have cost parity with natural gas.’

“You can’t get there without innovation,” she said. “You have to put things to work to reduce this cost and act as quickly as possible.”