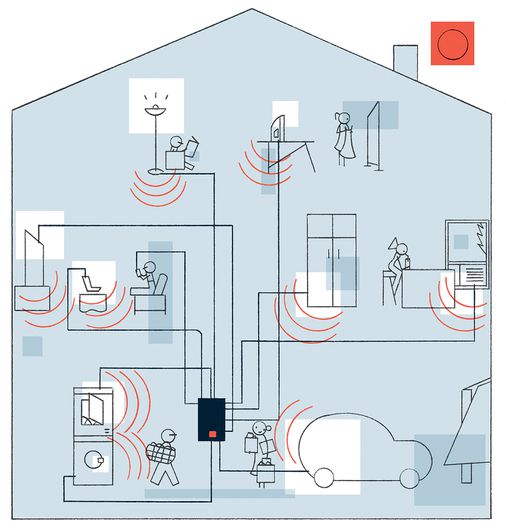 From his office near Central Square, Mike Phillips can see that someone left the exercise bike turned on at his home in Belmont. He taps an app on his phone and loads dozens of other details about his home — from when his solar panels came out to the last time his garage door opened.

All of this information is transmitted by Sense, a sleek orange box made by his company, Sense Labs, that sits under his circuit breaker panel and tracks the flow of electricity in and around his home. Sense is built on the idea that every home appliance has a different signature – the peak when a fridge starts to cool, for example, is different from when the air conditioner turns on. Giving consumers an easier way to monitor their homes could save them money or even alert them to problems.

“Everyone thinks it’s their fridge and their lights. It’s not. These things are important, but every home has some crazy energy consumers that if you knew you could go fix it,” says Phillips, co-founder and CEO of the company. Phillips says customers using the product, which debuted in 2016, have found huge surprises in their homes – one found that a roof heating coil used to prevent damage by the ice had not been extinguished when spring arrived. And some research has shown that nearly a quarter of electricity consumption comes from devices that are never turned off.

Despite the increased emphasis on energy efficiency, home energy monitors have not gone mainstream, in part because they can be complicated to install. Sense thinks the latest version of its product is easy enough to use — and cheap enough to install — that power monitoring can go mainstream. Where some home monitoring products need to plug into every circuit breaker, Sense plugs into a single circuit breaker and places two current sensing loops around the main power cables to monitor the flow of electricity.

Phillips and his co-founders are veterans of the speech recognition industry, and some principles from their former jobs fuel Sense. Speech recognition algorithms examine sound waveforms to differentiate between words. Sense applies similar algorithms to separate peaks and dips in electricity consumption and continues to expand its list of devices it can discern turning on and off.

Right now, a Sense monitor starts at $299, plus about $115 to install. Phillips says typical electricity users can expect to cut their bills by about $100 a year. It’s widely available, and Vermont’s utility-funded energy-saving program, Efficiency Vermont, has begun offering rebates to customers who purchase Sense, which will reduce the price by about $200.

Phillips acknowledges that Sense needs to persuade users that they can trust a small company with the intimate details of running their homes. Sense, after all, knows when your lights come on and when you turn off your television. Phillips says Sense gives users full control over how their data is shared. He says the company is also working on developing a feature that could notify users if something is wrong with their home, such as wires that need replacing or an appliance that needs fixing.

“The ability to let you know when something bad is happening is a very important part of that over time,” Phillips says.

Andy Rosen is a Boston Globe writer. Send your comments to [email protected] Follow us on twitter @BostonGlobeMag.