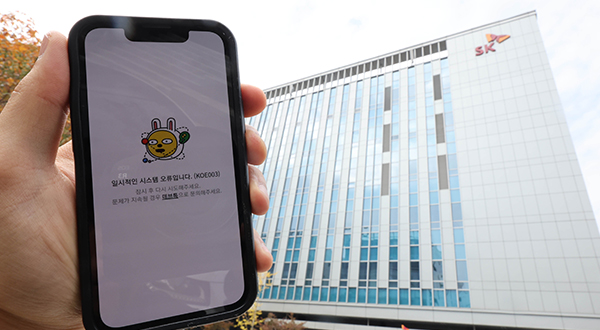 A sharp increase in electricity consumption, data overload and the community’s rejection of data centers for backup have all allegedly contributed to the buildup to a fire at SK C&C’s Pangyo data center that destroyed the KakaoTalk system, a messaging application used by most Koreans.

The fire broke out at the data center housing Kakao’s servers over the weekend, and firefighters tentatively concluded that batteries inside the building’s underground electrical room caused the blaze.

Data submitted to Representative Rho Yong-ho of KEPCO’s ruling People’s Power Party showed that the electricity used by the data center in Seongnam, Gyeonggi, home to many IT companies, increased by 33 percent from from 96.4 GWh in 2020 to 128 GWh in 2021. The increase is more than three times the national average increase of 10%, suggesting that excessive energy consumption was one of the remote causes of the fire.

A majority of 58.9 percent or 86 of the 146 data centers nationwide are concentrated in the metropolitan area, including Seoul, Gyeonggi and Incheon, whose power consumption accounted for 74.5 percent in 2021.

The concentration of data centers in the metropolitan area owes to community NIMBY-ism. Naver has already chosen Yongin City as a strong candidate location to build its new data center, but the plan was canceled due to opposition from residents.

The power consumption of the top 10 out of 146 data centers is 40% of the total, increasing the need for data center redundancy for data backup.

Of the top 10 energy-consuming data centers, only one is located in Gangwon Province, and the other nine are in Seoul and Gyeonggi.

As the role of data centers increases in the daily life of citizens, data center redundancy is needed to prepare for potential emergency situations, Representative Rho Yong-ho said, adding that it is necessary to consider ways to locate and manage data centers in areas where it is easy to provide stable power and cool heat.

By Chu Dong-hoon and Minu Kim

The total capacity of renewable energy sources must be increased…