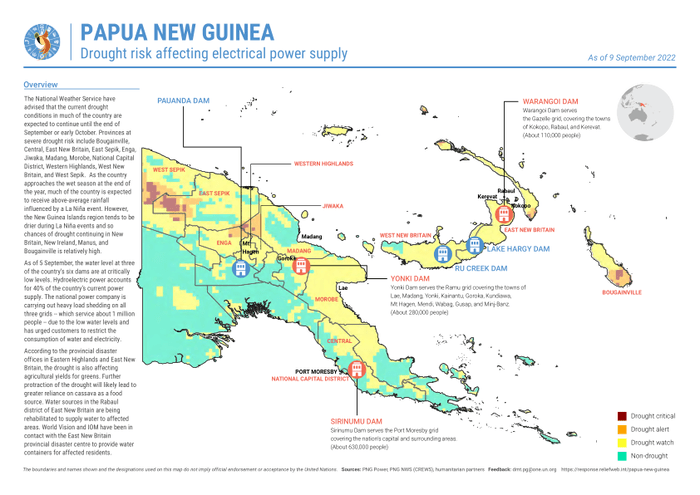 The National Weather Service said current drought conditions across much of the country are expected to continue through late September or early October. Provinces at severe drought risk include Bougainville, Central, East New Britain, East Sepik, Enga, Jiwaka, Madang, Morobe, National Capital District, Western Highlands, West New Britain and West Sepik. As the country approaches the rainy season at the end of the year, much of the country is expected to receive above average rainfall influenced by a La Niña event. However, the New Guinea Islands region tends to be drier during La Niña events and the risk of drought in New Britain, New Ireland, Manus and Bougainville is therefore relatively high.

As of September 5, water levels at three of the country’s six dams were at extremely low levels. Hydroelectric power accounts for 40% of the country’s current power supply. The national electricity company is carrying out heavy load shedding on the three networks – which serve around 1 million people – due to low water levels and has urged customers to limit their water and electricity consumption.

According to the Eastern Highlands and East New Britain provincial disaster offices, the drought is also affecting agricultural yields of green vegetables. Further prolongation of the drought is likely to lead to greater reliance on cassava as a food source. Water sources in the Rabaul district of eastern New Britain are being rehabilitated to supply water to affected areas. World Vision and IOM have been in contact with the East New Britain Provincial Disaster Center to provide water containers to affected residents.