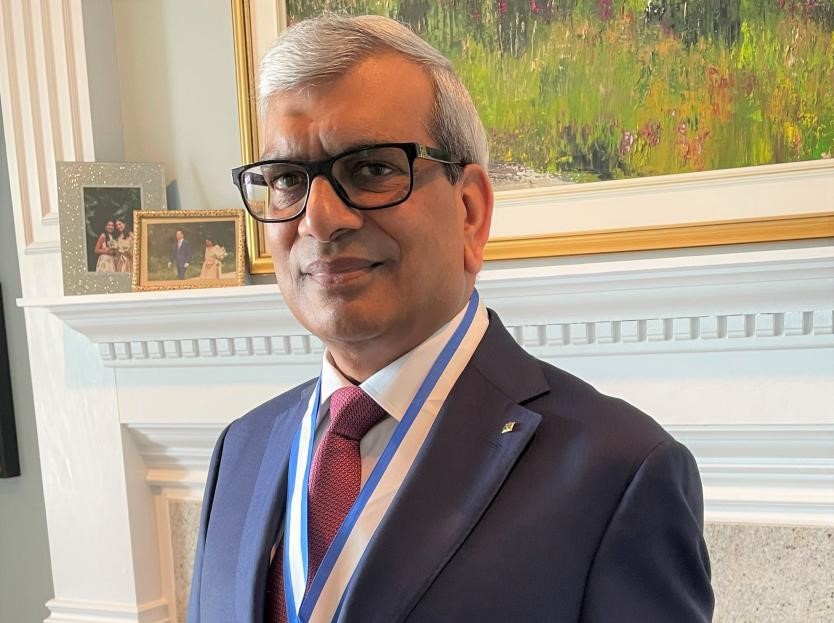 On Thursday, May 13, 2021, in a virtual ceremony, Dr. Praveen Jain of Queen’s University received a prestigious Institute of Electrical and Electronics Engineers (IEEE) Medal in Power Engineering (2021), recognizing his 40 years of career in research and achievements. Dr. Jain is the third Canadian to receive this medal in IEEE history.

Dr. Jain is Director of the Queen’s Center for Energy and Power Electronics Research within the Department of Electrical and Power Engineering. During his career, his contributions have focused on the theory and practice of high frequency power conversion systems. He also holds the Canada Research Chair in Power Electronics. Dr. Jain has worked at Queen’s since 2001. Over the years, he has secured over $35 million in external research funding, and his work has resulted in over 600 publications and 100 patents. He is also the founder of two companies: CHiL Semiconductor, which designs digital power control chips, and Sparq Systems, which develops solar micro-inverters.

“I was pleasantly surprised to learn that I was the recipient of the highest distinction in the entire field of electrical energy. Fortunately, I am lucky and have done very well in my career, but receiving this medal has a special meaning for me. It’s every electrical engineer’s dream,” Jain said.

Dr. Jain is recognized as the pioneer in his field for revolutionizing many aspects of high frequency power conversion technology with innovations that have found applications in the space, telecommunications, computer , induction melting and renewable energies.

“I wanted to be an engineer, but what kind, I had no idea,” he explained. “Knowing nothing, I chose electrical engineering, only because I had to indicate a choice on my application for admission. I was among the best students in the entrance exam and was awarded first choice. That’s how I got into electrical engineering.

Graduated from Allahabad University, India, BE (Honours), Dr. Jain has completed his MSc and Ph.D. in Electrical Engineering from the University of Toronto. At U of T, he worked under the late Professor Shashi Dewan, a fundamental pillar of power electronics.

Early in his career, Jain invented a new class of single-stage high-frequency AC-DC resonant converters with near-unity power. The culmination of this invention gained momentum when Dr. Jain presented an idea to his superiors, which was later accepted as the design for power converters for the International Space Station’s Canadarm2.

“It was my first invention when I started in the industry,” Praveen explained. “It came to me while I was walking after lunch and I worked on it for a while. However, the hardest part was pitching my idea to management, which I had never done before. I I was very nervous, but it ended up being a very rewarding experience.

After a rewarding career as a power engineer at prestigious institutions such as Canadian Astronautics and Nortel Networks, Dr. Jain joined academia, previously working as a professor at Concordia University and currently at Queen’s University. .

“I was approached about joining academia and said no three times. I was invited to lecture at Concordia and have fallen in love with academia ever since,” Dr. Jain said.

“I still work a lot with industry, but academia has given me a lot of freedom to focus on and expand my interests.”

He has been an active member of the IEEE since the 1980s.

The IEEE is the world’s largest organization of technical engineering professionals dedicated to advancing technology for the benefit of mankind. The IEEE Might Medal recognizes outstanding contributions to the field and is awarded to one out of approximately 50,000 IEEE members each year.

Electricity consumption increased by 19% in the first half of May

Indonesia to add 41 GW of electricity in 10 years