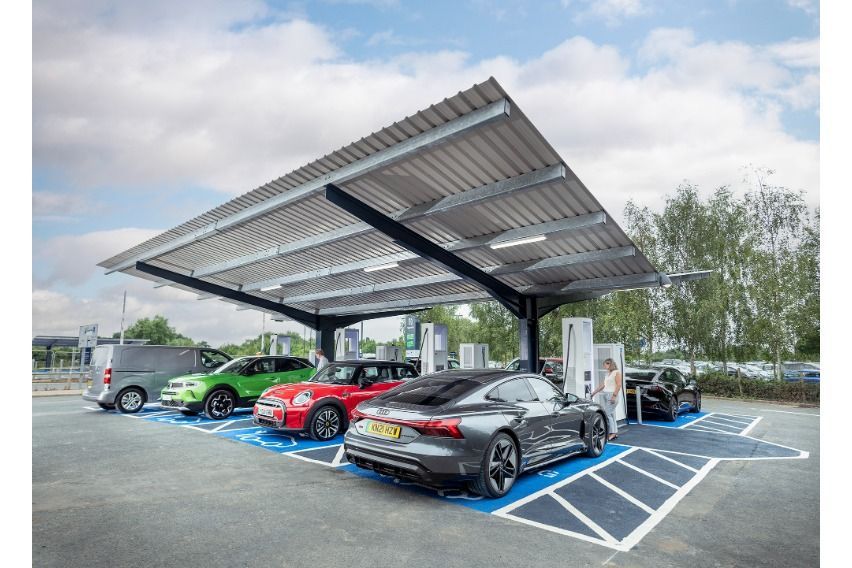 Search the sky for energy sources to charge electric vehicles

Yet another advanced territory has grown, made more modern and greener.

In a recent press release, two EV “HyperHubs” were announced to open in York, northern England. According to HyperHub project owner EvoEnergy, these charging stations “aim to serve as a demonstration of best practices for the design of EV charging facilities in cities.”

The Monks Cross HyperHub is one of the largest electric vehicle charging centers in the north of England, EvoEnergy also claims. It includes four 175 kW ultra-fast chargers that can be upgraded up to 350 kW, four 50 kW fast chargers, with an adjacent area with thirty 7 kW chargers.

What makes this charging station environmentally friendly is the way it obtains energy.

“The HyperHub also features a solar canopy that allows the site to generate its own renewable energy that can be stored in Tesla Powerpack batteries at the charging hub, helping to strengthen the grid,” the statement explains.

As we have already said, electric vehicle charging systems must also come from cleaner sources or measures of energy. Considering the HyperHub’s energy supply comes from solar power, this charging hub seems to follow that theory to the letter.

This suggests that solar-powered electric vehicle charging centers can be implemented in countries like the Philippines. We live in the tropics, after all, and experience scorching heat far more often than rain and darkness. If we are talking about sunlight, then surely we have plenty of it here.

The local oil company Unioil seems to have taken advantage of our still sunny and dry weather. According to its press release dated last year, Unioil said it “spearheaded the installation of electric vehicle charging stations at service stations. It was in 2017 that Unioil installed its first electric vehicle charging unit at Unioil Congressional Ave., followed by another at Unioil EDSA Guadalupe.”

The Unioil Congressional Ave. has a Delta AC Mini Plus charger that supports electric vehicles with a Type 2 plug, the oil company said. The charger is powered by the peculiar-looking Smartflower device that absorbs solar energy.

Using solar power, the oil company says the charger has reduced “the carbon footprint by 4.7 metric tons per year or the equivalent of planting about 5,000 trees.”

With the help of solar power, First Gen’s fast-charging station can recharge an electric vehicle’s battery to 80% in 40 minutes, a mere fraction of the 18 hours required by an ordinary home charger, Nissan Philippines Inc. (NPI), First Gen’s partner in this project, said in a statement.

And so the message is clear, literally speaking: an answer to clean energy sources for electric vehicles is in the sky.

Could AI protect renewable energy sources on the grid?