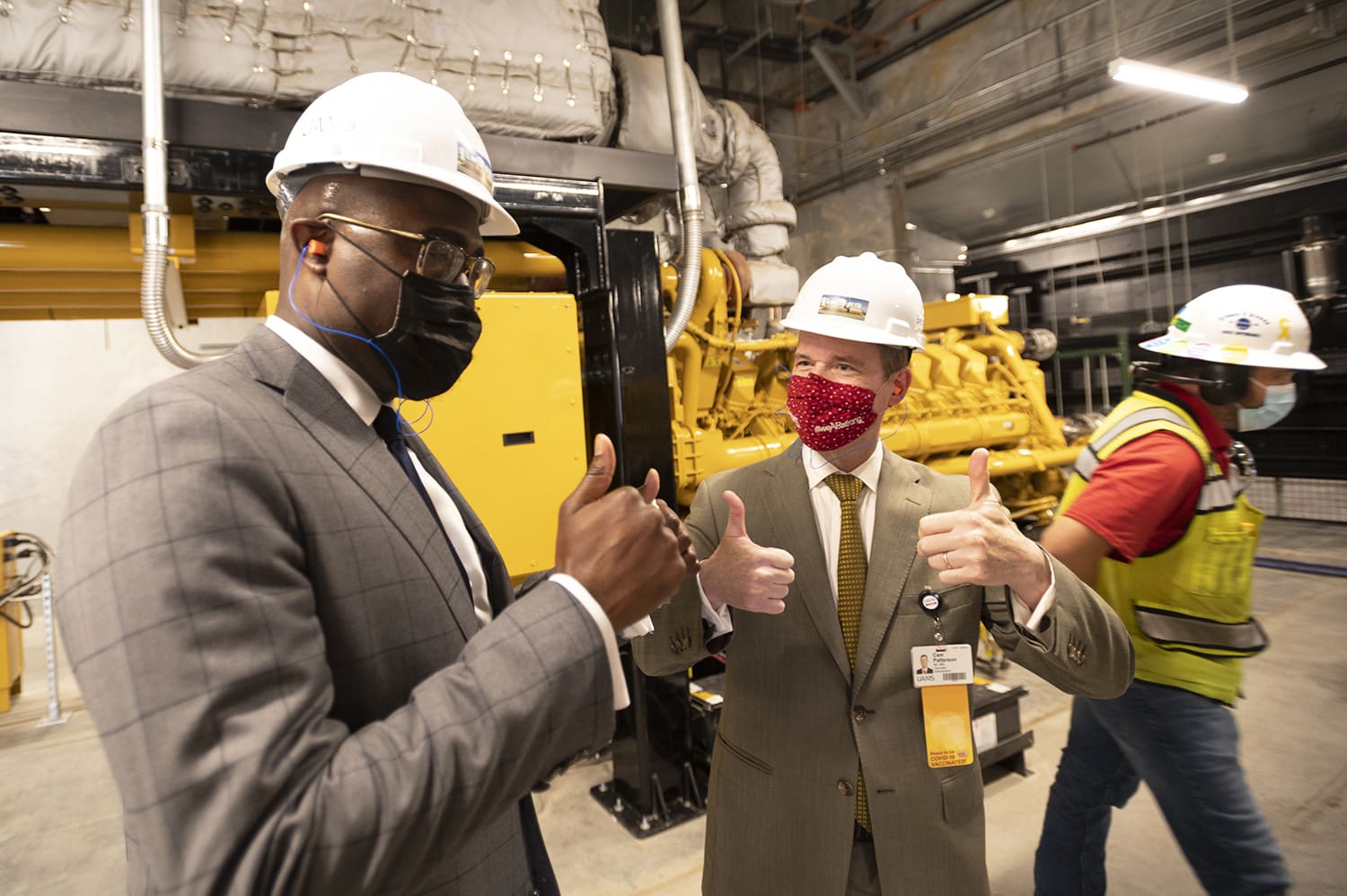 Chancellor Cam Patterson, right, shares a positive moment with Little Rock Mayor Frank Scott Jr. after the mayor turned on one of the generators at the new power plant at the end of the official opening of the ‘installation.

October 14, 2021 | LITTLE ROCK – The University of Arkansas for Medical Sciences (UAMS) today celebrated the completion of a new $50 million power plant on the east side of its Little Rock campus.

The plant is a key component of a $150 million energy project that is expected to be completed by the end of 2022 and result in estimated annual savings of $4.8 million. The project is funded by a bond issue approved in 2019 by the University of Arkansas Board of Trustees.

Standing behind the ribbon as it was cut were the board members; local dignitaries; Cam Patterson, UAMS Chancellor, MD, MBA; and UAMS officials involved in project planning and oversight. 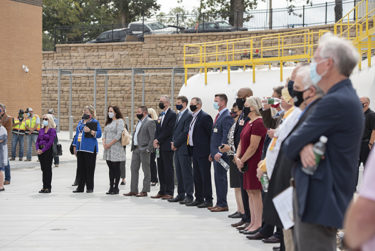 Part of the audience at the inauguration ceremony listen to one of the speakers at the October 14 event.Image by Evan Lewis

“Almost two years ago, many of us were at this site to mark the start of construction,” Patterson said. “Today we celebrate its early completion. It is estimated that UAMS will save $4.8 million annually. Completing the power plant sooner means we can start saving sooner, allowing us to save even more This project is proof of the seriousness with which the university takes its responsibility to be a good steward of public money.

In addition to the construction of the new power plant, the energy project includes the replacement of the exterior and infrastructure of the Barton building, as well as an upgrade of the campus building control systems, interior lighting and exterior, electrical and mechanical systems. The new power plant will provide 100% backup power for the UAMS campus, including the cooling system and research facilities. Currently, the UAMS West Central Power Plant provides backup power to the UAMS inpatient facilities.

The comprehensive energy project allows UAMS to meet $101 million in maintenance needs and energy efficiency measures. Upon completion, UAMS’ energy efficiency ranking will be in the top 1% of all academic medical centers in the United States.

The project also included the diversion and expansion of Pine Street and the ultimate partial closure of Cedar Street in the spring of 2022. Much of the new roadwork is complete. The City of Little Rock contributed $4.6 million toward the projected $10 million cost of the move and other street improvements.

“The successful conclusion of this phase of the energy project is tangible proof of what the City of Little Rock and UAMS have done, are doing, and will continue to do together,” said Little Rock Mayor Frank Scott Jr. The challenges we both faced during the pandemic have only strengthened our bond, and today we are happy to join you in celebrating our collaboration and what it has achieved.

In addition to Patterson and Scott, other dignitaries at the inauguration included UAMS State Representative Tippi McCullough; State Representative Ashley Hudson; ; Morril Harriman, Chair of the Board Buildings and Grounds Committee; Kelly Eichler, associate secretary of the University of Arkansas Board of Trustees; Donald R. Bobbitt, president of the University of Arkansas system; Beau Blair, Chair of the UAMS Advisory Board; Jay Chessir, president and CEO of the Little Rock Regional Chamber of Commerce; Christina Clark, Chief Operating Officer of UAMS; and representatives from CDI Contractors, Arkansas Energy Office and Bernhard Energy.

The team that has worked on the power plant project for the past two years consists of Bernhard, CDI, Clark Contractors, Kirchner Architecture and Clear Energy – all Arkansas companies.

UAMS is the only health sciences university in the state, with colleges of medicine, nursing, pharmacy, health professions, and public health; a doctoral school; a hospital; a main campus in Little Rock; a Northwestern Arkansas Regional Campus in Fayetteville; a statewide network of regional campuses; and seven institutes: Winthrop P. Rockefeller Cancer Institute, Jackson T. Stephens Spine & Neurosciences Institute, Harvey & Bernice Jones Eye Institute, Psychiatric Research Institute, Donald W. Reynolds Institute on Aging, Translational Research Institute, and Institute for Digital Health & Innovation. UAMS includes UAMS Health, a statewide health system that encompasses the entire clinical enterprise of UAMS. UAMS is the only Level 1 adult trauma center in the state. US News and World Report Recognized UAMS Medical Center as Best Hospital for 2021-22; ranked its ear, nose and throat program among the top 50 nationally for the third year; and named five high performing areas – colon cancer surgery, diabetes, hip replacement, knee replacement and stroke. Forbes The magazine ranked UAMS seventh in the nation on its list of Best Diversity Employers. UAMS also ranked in the top 30% nationally on Forbes’ List of Top Employers for Women and was the only Arkansas employer included. UAMS has 3,047 students, 873 medical residents and fellows, and six resident dentists. It is the state’s largest public employer with more than 10,000 employees, including 1,200 physicians who provide patient care at UAMS, its regional campuses, Arkansas Children’s, VA Medical Center and Baptist Health. Visit www.uams.edu or uamshealth.com. Find us on Facebook, TwitterYouTube or Instagram.