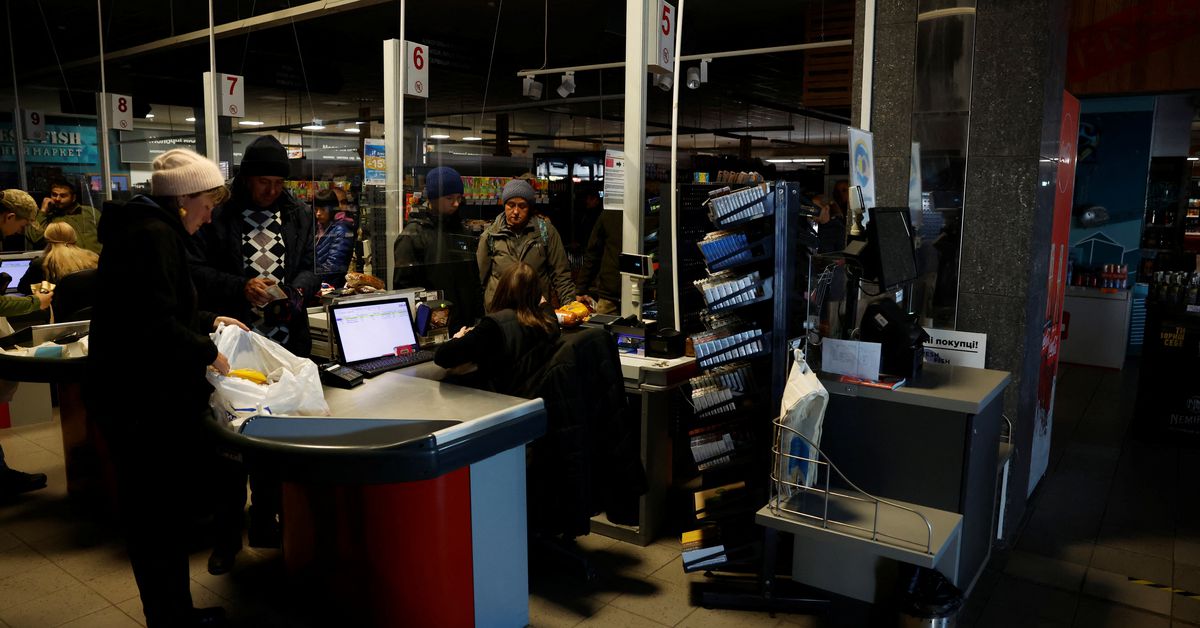 Oct 20 (Reuters) – Ukraine is restricting electricity use across the country for the first time on Thursday following a barrage of Russian missile and drone attacks that destroyed some power plants just before the arrival of the cold winter months.

Electricity supply will be limited between 7 a.m. and 11 p.m., government officials and grid operator Ukrenergo said, and temporary blackouts were possible if people did not minimize their electricity use, a presidential aide said. .

Although limited to Thursday, “we do not exclude that with the onset of cold weather, we will ask you for your help even more frequently,” Ukrenergo said.

Russia has intensified its missile and drone attacks against Ukraine’s electricity and water infrastructure in recent days.

“There is new damage to critical infrastructure. Three energy installations were destroyed by the enemy today,” President Volodymyr Zelenskiy said in his Wednesday evening video address.

“We are preparing for all sorts of scenarios in view of the winter season. We assume that Russian terror will be directed against energy installations until, with the help of partners, we are able to bring down 100% enemy missiles and drones,” said Zelenskiy, who said earlier in the week that a third of his country’s power plants had been hit by Russian airstrikes.

The mayor of the western city of Lviv said on television that it would take months to repair the electrical substations that were damaged.

Ukraine has so far shot down a total of 233 Iranian-made drones used by Russia, including 21 on Wednesday, Zelenskiy said.

Reuters witnesses said five drones struck the southern Ukrainian city of Mykolaiv early Thursday, but it was unclear where they exploded or how much damage was caused.

Ukraine accuses Russia of using Iranian-made “Shahed-136 suicide drones”, which fly towards their target and explode. Iran denies providing them and the Kremlin has also denied using them.

The United States, Britain and France raised the issue of Iran’s alleged transfer of drones to Russia at a meeting of the UN Security Council on Wednesday, the spokesman said. US State Department Ned Price.

Russia will reassess its cooperation with UN Secretary-General Antonio Guterres and his team if Guterres sends experts to Ukraine to inspect downed drones that Ukraine and the West believe were made in Iran, he told the press Russian deputy ambassador to the UN, Dmitry Polyanskiy.

THE BATTLE OF KHERSON LIES

In Kherson, the only regional capital that Russian forces have captured since their invasion eight months ago, the Russian-appointed administration has prepared an evacuation.

Footage of people using boats to flee the strategic southern city was broadcast by Russian state television, which described the exodus on the Dnipro River as an attempt to evacuate civilians before it became a combat area. About 50,000 to 60,000 people would be displaced in the next six days, said Vladimir Saldo, the Russian-installed leader in Kherson.

Personnel from the Russian-backed administration of Kherson were also moved to the eastern side of the Dnipro, Saldo said, although he said Russia had the resources to hold the city and even counterattack if necessary. .

Kherson is arguably the most strategically important of the four regions Russia claims to have annexed in recent weeks. It controls both the only land route to the Crimean peninsula which Russia seized in 2014, and the mouth of the Dnipro, the 2,200 km (1,367 mile) river that bisects Ukraine.

In eastern Ukraine, on the border with Russia, forces from Moscow have focused their main advance attempts on the towns of Bakhmut and Avdiivka, the Armed Forces General Staff said on Wednesday evening. Ukrainians in a press release.

Bakhmut is at the center of Russia’s slow advance in the Donetsk region. The forces trained tank and artillery fire on at least 10 towns in the region, including Bakhmut, Soledar and Bilohorivka, according to the Ukrainian statement.

Reuters was unable to verify reports from the battlefield.

Russian President Vladimir Putin has demanded an all-Russian war effort and on Wednesday declared martial law in areas of Ukraine occupied by his forces.

A package of measures, including bolstering the security powers of all of Russia’s regional governors, was Putin’s latest escalation of the war to counter a string of major defeats at the hands of Ukrainian forces since early September.

However, it was far from clear how quickly or how effectively the new measures could strengthen Russia’s military position on the ground. The US State Department said Russia was resorting to “desperate tactics”. A Ukrainian official said that would not change anything.

Meanwhile, the United States imposed new sanctions on Russia, targeting a network that Washington accused of sourcing military and dual-use technologies from American manufacturers and supplying them to Russian users.