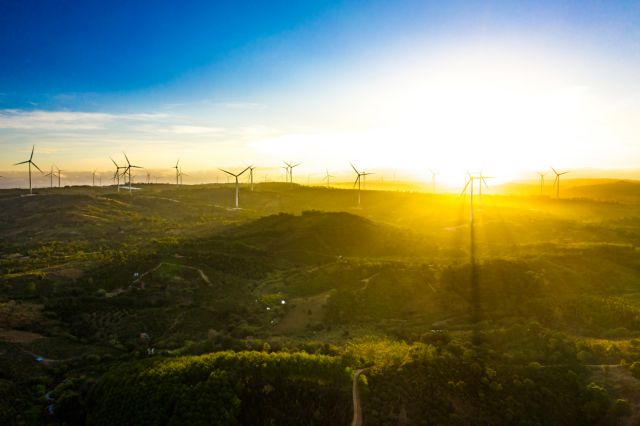 HA NỘI — The potential of renewable energies, in particular wind and solar, is one of the keys to Việt Nam’s energy transformation towards carbon neutrality, but the barriers linked to the unsuitability of the transmission network and the pricing mechanism waste the capacity of billions of kWh of electricity, according to experts.

According to preliminary studies and assessments, the onshore wind potential of Việt Nam is about 217 GW, and the offshore wind power is more than 160 GW. Offshore wind energy is characterized by long operating hours and high efficiency.

Lê Thành Thanh, Deputy Director of the Ministry of Industry and Commerce of Sóc Trăng, said: “The province has planned to develop 20 wind farms, including 18 wind farms with investment certificates with a total capacity of 1,345 MW and two parks under study.

Among 18 farms, 11 projects started construction in 2020 with a total capacity of 496.4 MW. As of October 31, 2021, the last day of the FIT price, four farms have been put into commercial operation, he said, adding that other projects were also completed but could not be connected to the grid because the FIT pricing mechanism had expired.

Thanh told local media, “The province still has many places that could develop farms. However, they have to wait until the PDP VIII (National Electricity Development Plan for the period 2021-30, with a vision towards 2045) is approved to have a basis to propose a new project.

In the southernmost province of Cà Mau, People’s Committee Chairman Huỳnh Quốc Việt said, “Cà Mau has 16 wind farms with a capacity of 1,000 MW. In which, 12 projects obtained investment certificates and five investors implemented their projects, but only three were connected to the national grid for commercial operation with a total capacity of only 100 MW by the FIT deadline .

Việt said, “As a locality with high wind power development potential, the province has proposed to add 24 wind power projects with a capacity of 12,018 MW to the national energy development plan. However, it still has to wait for PDP VIII to be approved.

According to Vietnam Electricity (EVN), by the end of October 31, 2021, the final deadline for the recognition of commercial operation projects and for the projects to benefit from the support price (FIT) under Decision No. 39/QĐ-TTg of the Prime Minister, 84/146 wind projects had signed power purchase agreements (PPAs) with EVN, for a total capacity of nearly 4,000 MW.

Thus, 62 projects with a total capacity of 4,170 MW which also had PPA contracts with EVN, but due to slow progress, could not be put into commercial operation in time. Many projects have completed the construction and installation of equipment, but could not be commercially operated due to the end of the FIT pricing mechanism, EVN said.

As Việt Nam tries to develop solar energy, the pace of project development is faster than that of transmission infrastructure.

As a result, the power industry temporarily suspended the connection of new projects and reduced the capacity of the two projects.

According to EVN, in 2021, the untapped electricity production from the aforementioned renewable energy sources, which increased to 1.68 billion kWh of which 1.25 billion kWh was from solar energy, had to be reduced by 430 million kWh according to the EVN program.